Many nations have their beauty queens. In Nepal, the Kumari — or “Living Goddess” — takes female perfection to the highest level: worship.

There are several Kumaris in Nepal who are worshiped by Hindu and Buddhist followers. These young women, chosen at ages ranging from four years old to seven, spend their youth adored as the reincarnation of the supreme goddess Durga. The best known of the select few is the Royal Kumari of Kathmandu.

I had the good fortune to see the Kumari peek from her palace window. 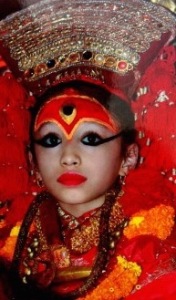 The worship of women goddesses is practically as old as time. Durga, the female diety personified by Kumari is recognized as “invincible”, the “mother of the universe”, the “incarnation or manifestation of all other goddesses.” She is said to occupy as holy a place in Hindu Vishnuism as Lord Krishna . Likewise, she is as revered as Shiva to the Shaiva.

There are many legends about the “Living Goddess”. The story that I heard from our tour guide, Shuresh, was similar to this account:

The goddess visited Trailokya Malla, King of Bhaktapur, Nepal (1560 to 1613), every night in the human form. The king and the goddess played tripasa (dice) while discussing the welfare of the country. One night the king made sexual advances towards the goddess. Enraged, the goddess stopped visiting the palace. The king, in regret, pleaded for her return. Finally, the goddess agreed to appear in the body of a virgin girl from the Shaka (Newar family from the Katmandu valley.) Wikipedia

In Nepal, the veneration of a living Kumari is as recent as the 17th century.

Because the “Living Goddess” (Kumari) must be a “virgin girl from the Shaka family,” she is selected before puberty — as young as four years old. Experience has shown the Nepalese that a six or seven-year old girl is a better choice — as long as she has neither suffered a disease, nor lost a tooth.

The reign of a Kumari lasts until the chosen one has her first menstrual cycle. At that time, the selection of a new Kumari begins again. To qualify for Kumari, a Shaka girl child must be without a blemish. That means she can have no birthmarks or scars. Even a scratch can disqualify a young hopeful.

Other traditional requirements for Kumari are described poetically:

Additionally, her hair and eyes should be very black; she should have dainty hands and feet; small and well-recessed sexual organs; a set of twenty teeth; and a horoscope that is complementary to the King’s. Wikipedia

When a suitable candidate is selected for Kumari, she must demonstrate qualities of fearlessness and serenity. She must spend a night — alone — in a room strewn with the bloody heads of buffaloes and goats, slaughtered specifically for the ritual. If the young girl passes the “night of horrors” test, her next challenge is to identify the personal belongings of the last Kumari which are spread out before her.

The last time the new Kumari is seen in public, other than on display for ceremonial events, is the day she is paraded through Kathmandu’s Durbar Square. From that time hence, her feet never touch the ground and she is hidden away in own own palace, the Kumari Ghar, where she rarely sees even her parents.

The day I visited the Kumari Ghar, which is close to Durbar Square, the Kumari appeared in her window — a rare occasion and a sign of good fortune for any who see her.

Lucky for us, Shuresh produced a documentary about the Kumari and, obviously, he made a good impression with her guardians. When he stood beneath the window in the Kumari Chowk (courtyard) and called out to the elderly woman who was peeking out from the edge of the sill, the Kumari arrived to look outside, then disappeared in an instant — much too quickly for my camera. Nevertheless,  it was thrilling.

Today Durbar Square as I saw it in 2014 is much changed due to a devastating earthquake. These photos are precious reminders of the place and the people of Katmandu. 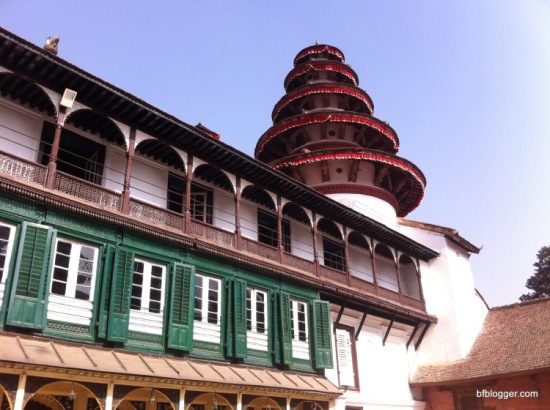