All who travel should go somewhere you’ve never heard of at least once in your life. It opens up a whole new world.

On a month-long tour of southern France and Italy with two of my Carolina friends, we veered off the familiar tourist map and ventured to the southern coast of Italy — to the “instep” of Italy’s boot. We were looking for a beach resort where we could rest from the longest part of our trip and recharge for the next. One of my fellow travelers was a “super duper, double crystal, diamond-crusted, ruby slipper, 24-karat gold medallion member” of a worldwide timeshare group. She said we could use one of her timeshare dates to visit a beach in Italy. She had never been to Europe and she was so excited about being able to use her timeshare points that I hated to tell her the hospitality star rating in Europe might not be up to the U.S. standards.

We chose the four-star Akiris Resort in Nova Siri. Every other beach resort in Italy was booked solid the dates we were traveling.  It didn’t really matter to me about the stars.  I just wanted to dip my toes in the Ionian Sea.

Along the Way
No one stumbles upon Nova Siri. Traveling there from Rome meant a two-hour flight to Bari, then a two-hour drive to Nova Siri. Bari is a relatively

large town on the Adriatic Sea. The population is close to 400,000.  Bari gained some small degree of fame from the movie “Bridges of Madison County”. Meryl Streep’s character claimed she “came from Bari.”

We probably should have spent a little time looking around the town, but our driver from the resort was waiting to take us to Nova Siri. Fortunately I have long legs and was given the privilege of riding in the front seat of the Audi taxi. The driver spoke a little English and was happy to answer my questions about his part of the world — the Basicilata region of Italy.

Basilicata covers a large area above the instep of Italy’s boot, with two short stretches of coastline: one on the Ionian Sea and the other on the western, Tyrrhenian shore. It shares borders with the Italian regions of Calabria, Puglia and Campania. Riding through the countryside from Bari to Nova Siri the topography of the land is a mix of mountain ranges, hills and plains.

While we never went directly through mountains, they were ever-present on the horizon. Towns along the way were few and far between. Occasionally we saw a village in the distance. In one area we drove through olive trees that lined both sides of the highway. A little farther down the road,  rows of grapevines stretched as far as you could see. The closer we got to Nova Siri, the more dramatically the scenery changed. Fields of yellow wheat replaced the grapevines. At times it seemed you could touch the wheat shafts as they were so close to the highway.

Akiris: A “Disneyland” on the Ionic Sea
Arriving at our destination in Nova Siri — the Akiris Resort —my Carolina friend with the timeshare points was a bit disappointed when we discovered Akiris was not the “four-star” resort she’d  expected; albeit, she remembered she’d been told the standards might be different.  For example, in our apartment-like dwelling there were three bedrooms, a kitchen and a living room with a sliding door to a patio. The rooms were large but one bedroom had bunk beds. (Guess who ended up with that one? My “friends” figured since I was tall, I could get up on the top bunk if I wanted to.) All the walls were bare.  There were no decorations or lamps anywhere. Just the basic essentials.  “Plush” would not be a word to describe the place, except, to be fair, the towels we rented for the beach were soft and thick. We ended up taking them back and forth to the apartment for our showers.

While the apartment might have been a little bleak, the beach that stretched behind the resort was far from ordinary. With mountains strewn behind the light green sea, it was magnificent.

One thing we noticed as soon as we checked in was that no one working at the resort spoke English. I mean no one. It was a family resort for Italians, That’s not to say there were no other Americans there. Like magnets we found each other. There were seven of us from the US and one woman from Germany. She spoke neither English nor Italian. We bonded together like a family. We ate together at the resort dining room and in cafes in the nearby town of Nova Siri Marina. We sat together at the nighttime events and we tried our best to participate in the cruiseship-like, all-Italian entertainment at the resort amphitheater. 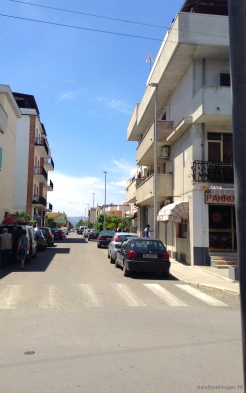 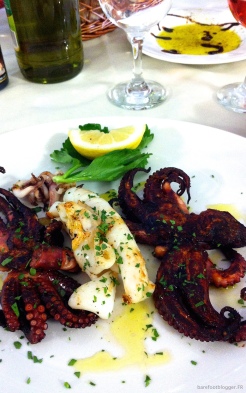 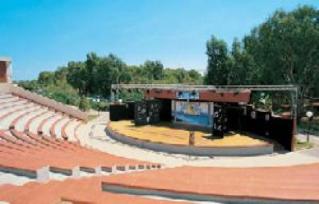 Mostly we lounged at the beach — exactly what we had come to do. 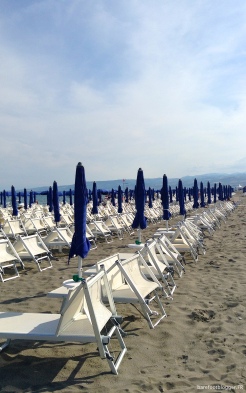 Some among our group took a side trip away from Nova Siri to visit the town of Matera, known as the film location for Mel Gibson’s Passion of Christ. This “little piggy” stayed home. The day’s journey to  Matera, would have been interesting  but I was committed to hanging out on the beach as much as possible during our break. Without the tourists.

Places to Visit in Basilicata

Now that I know about Matera, I’m anxious to return to see what I missed. It’s one of the two places that attract travellers to the Basilicata region.  Matera is famous for its cave-dwelling districts, abandoned in the 1950s, that are slowly being brought back to life. In 1993 Matera was included on the Unesco World Heritage list. It is believed to be one of the first human settlements on the penisula — dating from the Palaeolithic period. It was where Mel Gibson filmed “The Passion of Christ.” 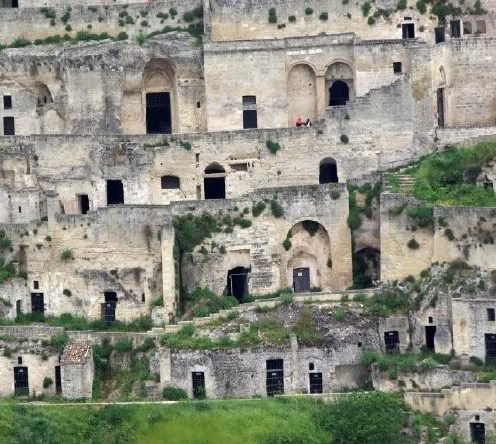 Maratea, the second most popular village in Basilicata, is on the Tyrrhenian coast in the far west part of the country. Situated high between the mountains and the sea, Maratea is connected to the rest of the country by modest highways and a railway line that runs through the town. It is especially popular with travelers who enjoy a slow-paced holiday in a place that  has remained virtually unchanged through the years.

Street in the town of Maratea – http://www.understandingitaly.com

Coastline of the town of Maratea – http://www.understandingitaly.com

Both Matera and Maratea fit my requirements for “off-the-beaten track” locations to visit. With all the world to see, however, I doubt I’ll return to Nova Siri. I’ll always remember it, though, for the friendships …  and the dip in the Ionian Sea.